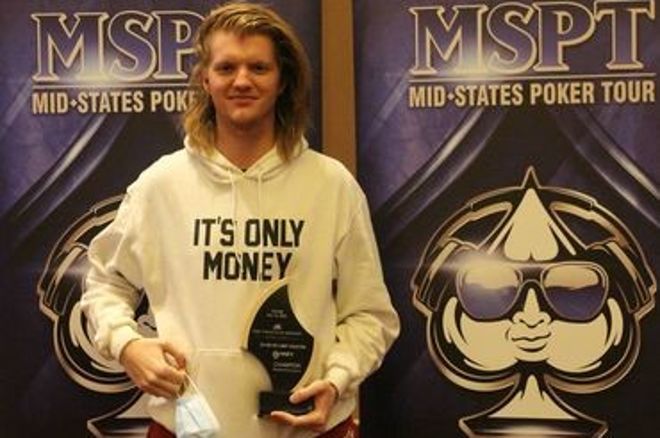 It took almost 16 hours on Sunday at the 2020 Mid-States Poker Tour (MSPT) Venetian $1,100 Main Event for a champion to be crowned and the first-place prize of $201,529 awarded. That champion was young up-and-comer Landon Tice, who did so for his first career score in the live realm of poker and in what was only his third live poker tournament. Tice outlasted a field of 1,123 entries in doing so, a figure that generated a total prize pool of more than $1 million.

Prior to this tournament, the 21-year-old from Boca Raton, Florida had just three online tournament cashes on his resume from this past summer: Tice got his start in poker by playing micro-stakes cash games online and has worked his way up, a journey highlighted by a mentor of sorts in Joey Ingram. Tice can now add an MSPT championship to his list of accomplishments.

“It feels good, you know,” said Tice after the tournament was over. “It feels so good!”

Tice won after a hard-fought heads-up battle against Brandon Lombardo that capped off a four-hour-long final table. Lombardo entered the match as a three-to-one underdog and held his ground, ultimately finding a double and taking the chip lead for a short time. However, nearly-even stacks went in when Tice made two pair on the river and he doubled to shorted Lombardo, who called Tice’s shove with top pair.

Of the 1,123 entries logged across two starting flights, 145 players returned Sunday morning for the start of Day 2. Seventeen eliminations occurred within the first level of play, leaving the 128 that remained all set to make it into the money. From there, the pace of eliminations remained steady and the field rapidly saw itself shrink. Just 45 players remained by the second break of the day, and two hours later, the final three tables had been reached with 24 left in contention.

Plenty of notables were still in at that time, including Nick Pupillo, Frank Funaro, Jason Seitz, and Sean Yu. Also still in was 2019 MSPT Player of the Year Mike Shin, and all of them fell short of reaching the final table with Shin being eliminated in ninth place to burst the final table bubble.

Several short stacks were just hanging on at that time, including the likes of David Larson, who had been below one big blind with 15 players remaining. Andrew Rodgers became the first casualty of the final table, and Larson followed in his steps after being unable to improve with king-ten against the pocket queens of Byung Shin. One hand later, Shin found his newly-padded stack all in with pocket nines against the ace-king of Tice, who hit a king on the flop to send Shin packing in sixth.

Fifteen minutes later, Tice knocked out Abraham Hichman in fifth, and play slowed from there. Two full levels of four-handed play passed and eventually Sara Stohler was the next one to find the rail, also falling to Tice. Tice’s work was not done, as he also knocked out Jesse Vilchez in third place to take an aforementioned three-to-one chip lead into his heads-up match with eventual runner-up Lombardo.

Lombardo gave Tice a run for his money, staying afloat and trading pots for nearly a full level before finding a double after out-kicking Tice with a pair of eights. A brief talk of chopping arose, but proposed figures worked for neither party and play resumed. A handful of minutes later, it was all over after Tice got a double of his own and finished the job from there.

Tice is not looking at letting up on the grind anytime soon, and is expected to be seen back at the Venetian for next weekend’s $1,600 Main Event.

A $1,600 buy-in, $400K GTD MSPT Main Event will take place at Venetian from November 19-23. Once again PokerNews will offer live updates straight from the tournament floor.

That tournament will start players with 30,000 in chips and play 60-minute levels. There will also be three starting flights instead of two starting with Day 1a at 11:10 a.m. on Thursday, November 19. Days 1b and 1c will take place at the same time on Friday, November 20, and Saturday, November 21 respectively. Late registration will remain open until 1:15 p.m. on Day 2, which will play out on Sunday, November 22.

Click here for more information on the $1,600 MSPT Venetian