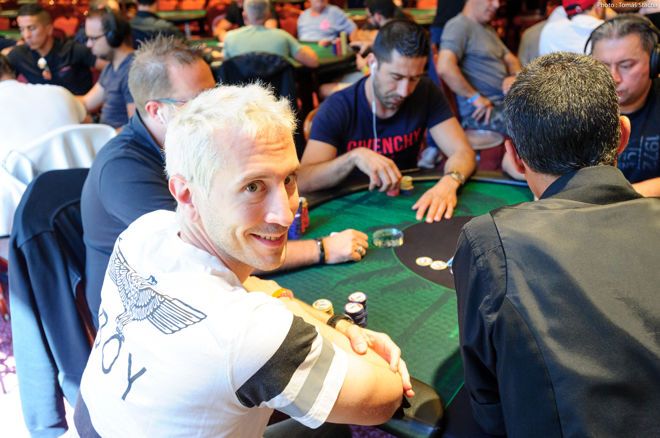 There isn’t much Bertrand “ElkY” Grospellier hasn’t won when it comes to poker. The flamboyant GGPoker Ambassador tops the French all-time money listings, partly because ElkY is one of a handful of players who have won live poker’s coveted Triple Crown.

ElkY navigated his way through a star-studded field in the latest edition of the GGPoker Super MILLION$, a $10,300 buy-in event with $1.5 million guaranteed prize pool. ElkY had a 1,245,988 stack of chips in front of him when David Peters busted in 10th place, setting the final table, the second Super MILLION$ finale ElkY has been involved in.

PokerNews’ Sarah Herring caught up to ElkY for an exclusive interview before the final table got underway.

I Got Super Lucky!

ElkY admits he got “super lucky” on the route to the final table; everyone needs a little luck when it comes to tournament poker.

“I won king-jack against kings all-in preflop when I was short,” explained ElkY, “I got lucky again with 12 or 13 players left, I shoved ace-four suited in the small blind with 18 big blinds and David Peters woke up with nines but I hit an ace. There were no sick hands, they all outplayed me, but I got lucky!”

Herring and ElkY chatted about the concept of the Super MILLION$, which has quickly become one of the highlights of the week across the entire online poker world. The Frenchman gave a little insight into GGPoker’s thinking.

“It’s a sick field, a really tough tournament that has been growing. Basically, the concept was to have a high roller tournament with a delayed final table so they can make a great show on the GGPoker official Twitch channel; it’s really great.”

“Rotterdam”, one of the GGPoker stream commentators, was a guest on the PokerNews podcast a couple of weeks ago and ElkY couldn’t speak highly enough of him. The pair know each other from their professional gaming days and have been in the same circles for several years now.

“I really love his passion for poker and for everything he does, he really loves the game. Because of his experience as not only a professional poker player but also a professional caster and commentator, he’s definitely the perfect fit for this show.”

The last time ElkY reached the Super MILLION$ final table he did so alongside one of his close friends. That happened again this time around.

“The first time I reached the final table I was there with Leon [Tsoukernik] and this time I am there with my friend, the French player Sebastien Grax. He’s also at the final table so it’s going to be interesting. It’s pretty fun, it always is when you play a tournament with a friend and you both reach the final table.”

Unfortunately, for ElkY at least, he couldn’t get the job done at the final table, and he had to make do with a fifth-place finish. That netted the popular Frenchman a cool $116,505 so it was still a great day at the office.

ElkY was flying high and held the chip lead when play was five-handed, but it all went wrong. He lost a few hands in quick succession and was left with 13.6 big blinds. Those went into the middle with king-jack from the cutoff, only to see his friend Sebastien Grax three-bet all-in over the top of him from the button with the dominating ace-king. The other players ducked out of the way. Both players paired their king on the river and ElkY fell by the wayside.

At least ElkY knows his chips went to a good cause because Grax eventually emerged victoriously.

“Gr4vyB04t” busted in fourth-place. The former hit a six-high straight on the river against the turned full house of Grax and he couldn’t get away from it.

Costa Rica’s “rebuyguy” saw their tournament end in third-place, again, after a clash with Grax. Rebuyguy’s last chips went into the middle with king-queen against Grax’s ace-four of diamonds. A king on the turn looked to have flipped the hand on it’s head, but the river was an ace to send the tournament into heads-up.

Perhaps ElkY will win the Super MILLION$ this coming week?

Win Your Way Into The Next $10,300 Super MILLION$ Tournament

Satellites for the next edition of the Super MILLION$ are running at GGPoker right now. Head there and see if you can follow in the footsteps of some of the greatest players in the world and become a GGPoker champion.