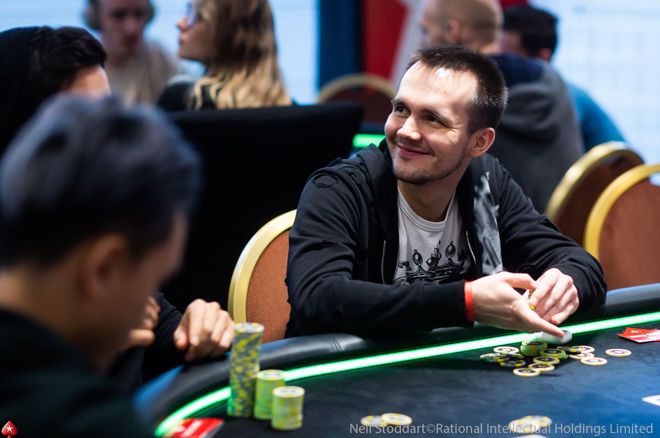 On the fourth day of the 2020 PokerStars European Poker Tour Online, the big notables were once again those claiming the spotlights. In EPT Online 06: $10,300 NLHE [8-Max, High Roller], it was Mikita “fish2013” Badziakouski who chopped the event with Matthias “iambest2” Eibinger. The pair of crushers received over $220K each for outlasting a 109-player field with the world’s very best in it. Badziakouski won the final hand and will officially add an EPT victory to his extensive resumé.

Check out below for all that transpired on Day 4 of the EPT Online festival.

On a short-lived final day of just two and a half hours, a winner has been crowned in EPT Online 06: $10,300 NLHE [8-Max, High Roller] and it was Mikita “fish2013” Badziakouski who became the latest champion of the 2020 PokerStars European Poker Tour (EPT) Online after he cut a deal with Matthias “iambest2” Eibinger heads-up.

For most of the final table, it was all about Eibinger, who never surrendered the lead until the heads-up deal was cut. Both then agreed to get their chips in preflop no matter what and Badziakouski’s prediction of “ok next hand flip book and then keep going till i bust you” turned out to be true.

Click here for a complete recap of EPT Online 06

Other familiar players to make it through to Day 2 and the $96,144 top prize are Bert “girafganger7” Stevens, Arsenii “josef_shvejk” Karmatckii, Thomas “WushuTM” Muehloecker, David “deivid29” Tovar, and Guillaume “Nolet20” Nolet.

It wasn’t a big field, but it certainly was a tough one populating the seats of EPT Online 09: $5,200 8-Game [High Roller]. A field of 51 entries has come down to just five remaining grinders, and as expected, some mixed-game legends are among the competitors.

Atop the counts: Dzmitry “Colisea” Urbanovich, the young all-arounder who has racked up an impressive handful of titles in various formats on PokerStars after first making himself known as a no-limit high-roller participant.

Then, there’s Jens “Fresh_oO_D” Lakemeier, who grabbed a mixed-game bracelet at the 2017 WSOP and has been a regular name at the end of big PokerStars tournaments as well.

In third, anonymous cash crusher “RaulGonzalez,” who can often be found playing the highest-stake mixed games running on the site.

Finally, World Championship of Online Poker legend Denis “aDrENalin710” Strebkov and Christian “Crisper” Pereira round it out as the short stacks.

The first event of the series that started all the way back on Sunday — the EPT Online 01: $1,050 Arena Championship — will finally play down to a winner tonight in addition to the two aforementioned tournaments.

There are also plenty of satellites running for EPT Online events, so head to the PokerStars client to find out more.

Two more events will kick off tonight where all eyes will be on EPT Online 10: $25,000 NLHE [8-Max, Super High Roller] with a guarantee of $2,000,000. Among those playing is streamer Lex Veldhuis, who has been bought into the event by his sponsor PokerStars to create awareness for Lewy body dementia, the disease that played a big role in his late father’s recent passing.