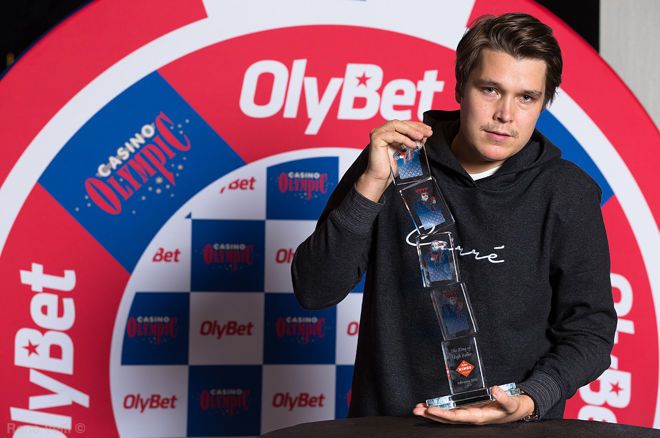 Day 6 of the 2020 PokerStars EPT Online festival took place on November 13, a day on the calendar that’s traditionally thought of being unlucky. The complete opposite was true for a trio of PokerStars players who triumphed in their respective events and scooped six-figure prizes as a result.

One of those scores weighed in at more than half a million dollars! Continue reading to discover all that transpired on Day 6 of the EPT Online festival.

Finland’s Eelis “EEE27” Pärssinen is a Pot-Limit Omaha specialist, not that you’d know based on this tremendous triumph. Pärssinen locked horns with 81 of the world’s best No-Limit Hold’em players in the $25,000 Super High Roller and he came out on top.

The final day started with nine players in the hunt for the title but those nine soon became eight with the exit of Artur “mararthur1” Martirosian. The talented Russian committed his stack with king-ten on a ten-high flop and lost to the black jacks of Andrei “ragAAAilaa19” Boghean.

Jamie “jamienixon90” Nixon was the next player to bust. His jack-eight lost to the ace-nine of Joao “Naza114” Vieira. Nixon flopped an eight but Vieira improved to a straight on the turn. Nixon collected $71,387 which is a super return considering he won his $25,000 seat via a $75 buy-in EPT Online edition Spin & Go!

Juan “Malaka$tyle” Pardo fell in seventh, which guaranteed a six-figure prize for the surviving players. The first of those $100,000+ scores when to Vieira, namely $127,249, when a clash with Benjamin “bencb789” Rolle didn’t go to plan.

Boghean was eliminated in fifth place by Pärssinen before Rolle ended David “MonkeyBausss” Laka’s hopes of a second EPT Online title by sending him to the showers. Laka banked $222,826 for this latest deep run.

Rolle fell in third for $302,837. He lost a huge pot against Christian “WATnlos” Rudolph and shipped the rest of his stack in with king-seven only to run into the dominating king-jack of Pärssinen.

The final hand saw a preflop raising war break out that resulted in Pärssinen’s jacks taking on Rudolph’s suited king-ten. A ten on the flop gave Rudolph some hope, but Pärssinen’s jacks held. This resigned Rudolph to the $404,324 runner-up prize and saw Pärssinen reel in $539,819.

Relive the action from the $25,00 Super High Roller

Dutchman Daan “DaanOss” Mulders is $111,184 richer than a couple of days ago plus he has an EPT Online title to his name. Mulders came out on top of a 637-strong field in the $1,050 NLHE 8-Max Deep Stacks and was a worthy champion.

Day 2 of this even saw some incredible poker players compete for a slice of the $637,000 prize pool. Such luminaries as Adrian “Amadi_017” Mateos, Conor “1_conor_b_1” Beresford, Team PokerStars Lex “L.Veldhuis” Veldhuis, Nikas “Lena900” Astedt, and Robin “robinho” Yliatlo being among those who cashed.

The final table was just as shark-infested, but Mulders kept his cool and emerged victoriously. It was no mean feat because Mulder had to battle with Peter “pitabread189” Chien, Caio “pessagno” Pessagno, and fourth-place finisher Samuel “€urop€ean” Vousden.

Mulders eventually found himself heads-up against Romania’s “Serebity_p” holding almost 100 million chips to his opponent’s 60.6 million. Mulders fell behind when his ace-queen lost a coinflip to the Romanian’s pocke nines, but clawed his way back into the match before exerting his dominance.

The ace-queen that cost Mulders dearly earlier in the one-on-one battle came good in the final hand. Mulders’ ace-queen beat the ace-nine of his opponent courtesy of a queen on the flop. With that, another six-figure score made its way to Mulders’ PokerStars account.

Only 41 players bought into this event, meaning only the top four finishers banked some prize money. Spare a thought for “GODofHU” and “FaNjkEEE” who busted at the hands of Jordi “prot0” Urlings in a double elimination on the bubble.

“ytrer” got their hands on $46,360 for their fourth-place exit, their jack-ten losing to the pocket queens of “Jhaoklet”.

Urlings’ king-queen proved no match for Greenwood’s pocket kings soon after to send the tournament into heads-up. The final hand saw all the chips go into the middle on the turn with Jhaoklet holding middle pair and an inside straight draw. Greenwood, however, had turned Broadway, which held to lock up yet another title.

Japan’s “shiromeneko” is the player to catch on Day 2 of the $1,050 NLHE 6-Max PKO event. Some 733 players bought in on Day 1 but only 44 of those managed to make it through the first day’s action.

Those returning 44 players are all in the money after Eduardo “Eduardo850” Silva crashed out in 96th place. Silva’s untimely demise meant such luminaries as Gianluca “Tankanza” Speranza, and Sam “Str8$$$Homey” Greenwood bagged some prize money.

Plenty of big names are still in the hunt for the $53,006 top prize, plus a whole host of bounty payments. Lex “L.Veldhuis” Veldhuis is one such star who is returning to the fray; Veldhuis sits back down in 28th place.