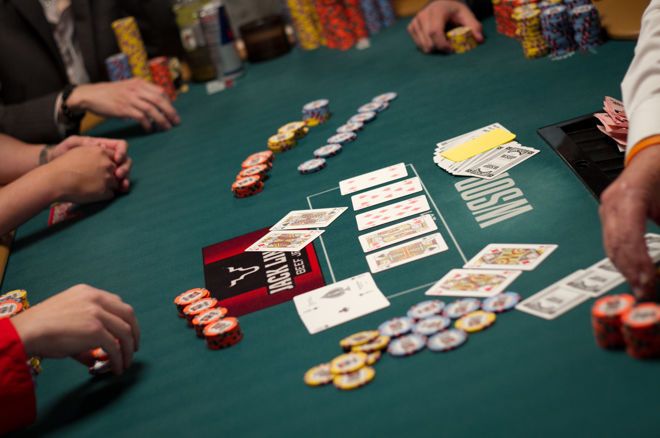 We spend a lot of time looking at heads-up races in Texas hold’em, learning the relative percentages of each side of the race in a preflop all-in situation.

But what if I asked you what were the relative percentages of victory in a three-way all-in — say, ace-king suited vs. pocket queens vs. pocket deuces?

Take a look at the three-way all-in situations below. Would you be able to fill in the win percentages for each hand correctly, or nearly so?

Few of us learn or memorize these statistics. We can look them up or use a poker odds calculator, of course. And some of us may have a good intuitive sense of how the percentages might break down.

But few have them memorized with the same specificity as we have heads-up match-ups.

See how you do in filling in those blanks above, then read on. I have the answers below, along with some added thoughts about how having some idea of how these hands perform in these spots might affect your strategy.

Hand 1: The first three-way contest has

winning about 39 percent of the showdowns against the other two hands.

wins about 32 percent of the time, and

wins just a little more than 28 percent of them.

clearly wants to get to a heads-up contest against either of the other hands if he can, as that would improve his chances of winning from less than 30 percent to close to 50 percent.

Depending on his position, the pocket deuces might do this either by making a large bet or by raising.

Hand 2: In the second match-up, with two suited overcards against a big pocket pair and a small one,

has just under a 38 percent chance of winning at showdown.

This compares unfavourably with

which has a 44.5 percent chance of victory.

Here ace-king has a strong incentive to try and knock out the third runner, while the queens don’t as their chance of winning goes up only slightly.

fares equally badly either in a three-way fight or heads-up against the queens, being around 18 percent to win in either case.

(The deuces would like if possible to get heads-up against ace-king suited — a virtual coin flip — but of course can’t know which opponent is holding that hand.)

Hand 3: The third match-up is also interesting to analyze.

In a three-way contest,

is nearly a 66 percent favorite, while

is only about 19 percent to win and

But if pocket kings can get heads-up against either of his opponents, the kings will be better than 81 percent versus queens and 82 percent against deuces.

That’s going from roughly a 2-to-1 favorite over the field to more than a 4-to-1 favorite — quite an improvement in his chances of winning.

On the other hand, the queens really don’t want to spend any money pushing for a heads-up contest against the kings, as his chances of victory would actually be just slightly worse in a heads-up match-up. (Of course, queens would love to get heads-up against deuces, but the kings obviously aren’t going anywhere here.)

Here’s the important takeaway from looking at three-way races.

Your poker strategy may sometimes call for trying to narrow down the race to just two of you.

This might be the case even if you’re behind in a three-way contest and remain an underdog heads-up.

In other situations, you’ll want to keep the race three-way, as your chances of victory either don’t diminish or even improve slightly with a third person in the pot, and of course the pot will be larger with a third player involved.

Again, I’m not sure exactly when and how this data or other data related to three-way all-ins might be useful.

I found it interesting to see what some typical match-ups are, even though in practice I generally focus on my opponents’ ranges more than on specific hands.

Even so, I know that looking at these contests — and many others — has helped my thinking about whether and how to push to get heads-up with different hands.

I’m interested in your thoughts as well — weigh in and let me know your views on how best to approach these three-way situations.

Ashley Adams has been playing poker for 50 years and writing about it since 2000. He is the author of hundreds of articles and two books, Winning 7-Card Stud (Kensington 2003) and Winning No-Limit Hold’em (Lighthouse 2012). He is also the host of poker radio show House of Cards. www.houseofcardsradio.com for broadcast times, stations, and podcasts.