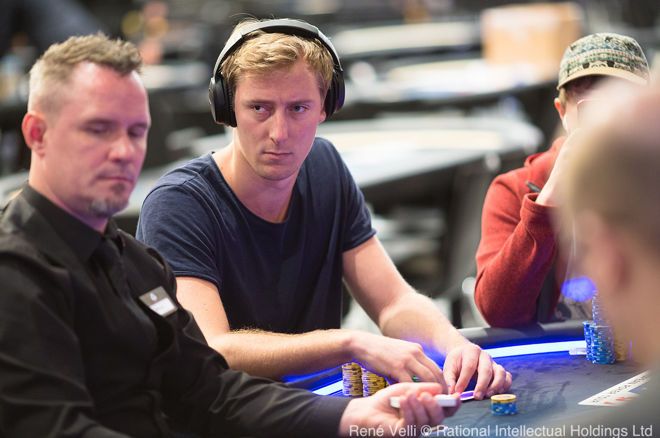 PokerNews will bring you live reporting of both of these events, as well as a selection of others as High Rollers Week draws to a close.

Jans Arends was the first of the new champions. He was one of 317 players who exchanged $2,100 for 25,000 chips and the chance to win a massive prize.

The top 44 finishers won a slice of the $634,000 prize pool, so spare a thought for Ivan Galinec who was the unfortunate soul who burst the money bubble and, therefore, the last player to go home empty-handed.

Some of the world’s best-known tournament grinders saw a return on their investment. The likes of Nick Petrangelo, Timothy Adams, Triple Crown winner Niall Farrell, Niklas Astedt, and Dzmitry Urbanovich all cashed.

Each of the nine finalists were guaranteed an $11,115 but none of them wanted to collect that prize with almost $120,000 up top.

Javier Gomez was the first casualty of the final table. “Man14c”, “FiestaPagana” and former EPT champion Aliaksei Boika followed Gomez to the rail.

Fifth-place and $36,429 went to “WanYu” with Guillaume Nolet running out of steam in fourth place after firing three bullets. The $49,015 he banked more than covered his buy-ins.

Heads-up was set with the elimination of Canada’s “Great Pretender”. The one-on-one battle between Arends and “Decent!” Went the way of the former and Arends got his hands on the $119,392 top prize, leaving Decent! to scoop the $88,734 runner-up prize.

*country as displayed in the GGPoker lobby

The 10th High Rollers Week event was a $5,200 buy-in No-Limit Hold’em affair that attracted 125 of the world’s best tournament players. Only 17 of those superstars received a return on their investment, the likes of Dario Sammartino, Guillaume Nolet, and Elio Fox cashing; Fox finished 11th for $13,492.

Timothy Adams, fresh from his first Super MILLION$ final table appearance, fell by the wayside in ninth and padded his bankroll with $15,358. Adrian Mateos bowed out in eighth-place before “LITIS” of Cyrpus saw their tournament end abruptly in seventh-place, a finish worth $26,541.

The pay jumps were now quite substantial, laddering in no less than $11,0000 chunks.

David Peters, who bubbled this week’s Super MILLION$, made amends by getting his hands on the $60,298 fourth-place prize. Finnish superstar Sami Kelopuro then had to make do with the $79,269 third-place prize.

Both heads-up players, “Down2Muck” and + each locked up six-figure scores, but there was a $32,000 difference in the payout. They didn’t strike a deal despite this gap, meaning Down2Muck banked $104,207 when they fell at the final hurdle. This left Beast2018! to reel in the huge $136,991 first place prize.

*country as displayed in the GGPoker lobby