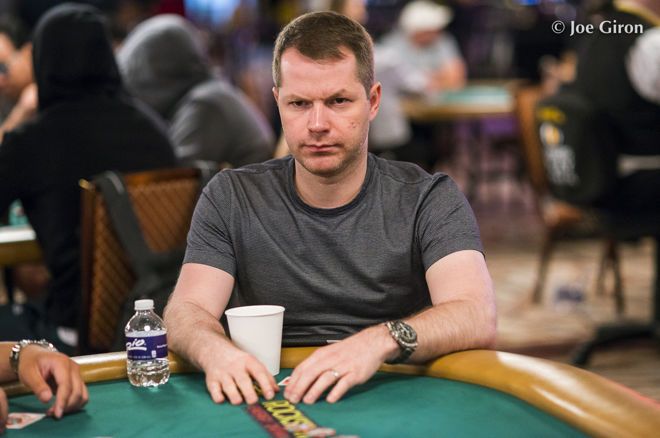 In my latest strategy column for PokerNews, I’m going to talk about a hand from the 2019 World Series of Poker Main Event. In it, I bluff two streets and then make top pair on the river. When I bet for value, my opponent jams, putting me in a terrible spot for my tournament life! What would you do here?

in the hijack. This is a spot where I should either three-bet or fold the majority of the time. You don’t want to limp with big offsuit cards in general, maybe ace-queen offsuit, but that’s about it. Either fold or three-bet them, because if you call there’s a good chance you’re dominated. If you three-bet, you can either get them to fold, get them to reveal the strength of their hand if they four-bet, or possibly call and then check-fold on the flop.

I do three-bet it to 20,000, and the good thing about king-queen offsuit is that it makes it harder for your opponent to have one of the premium hands as you block hands like kings, queens, ace-king, and ace-queen. Obviously, they could still have it, but it’s a little bit less likely and that does matter.

We aren’t raising for value nor to build a pot, but ideally to get a fold. If called, we’re then hoping to take it down on a post-flop betting round. On the

flop my opponent checked and I am going to continuation-bet my entire range every time, so I make it another 20K. I think I could’ve gotten away with a smaller bet like 14K.

In the WSOP Main Event, it’s usually a good time to bluff whenever your opponent takes a passive line.

Anyway, my opponent called, which was a little bit of a bummer, and the

paired the board on the turn. In the WSOP Main Event, it’s usually a good time to bluff whenever your opponent takes a passive line. As such, I wanted to play this hand like I had aces, so I made it 40K to go.

If my opponent called, the pot would go up to 170K, which is the amount my opponent had left. That would give me an opportunity to put out a pot-sized river bluff, which was my plan. It looked like that might come to fruition when my opponent called and the

completed the board on the river.

This was interesting as suddenly I had a lot of showdown value. I no longer needed to bluff, so the question became do I need to value bet? I could discount a lot of hands given how it played out, meaning I likely had the best hand unless my opponent had some sort of full house.

If I bet, I’d be trying to get called by hands like pocket queens, jacks, tens, and nines. How much would those hands call? Some players might call a small bet, but I wound up betting 78,000. Looking back, I think this was too much, I should’ve made it around 55,000.

A disaster happened as my opponent responded by check-raising all in for 170,000. That was brutal. Given the odds, we had to win roughly 20% of the time to make it worthwhile. Did I have that much of a chance to win? I don’t think so. I think my opponent, who didn’t seem like the bluffing type, almost always had a full house when check-jamming.

I folded and left myself with 31 BBs in the WSOP Main Event. What a bummer to lose out on that 139 BB pot.

For a more thorough breakdown of this hand, check out my thoughts in the following video:

Jonathan Little is a professional poker player and author with over $7,000,000 in live tournament earnings. He writes a weekly educational blog and hosts a podcast at JonathanLittlePoker.com. Sign up to learn poker from Jonathan for free at PokerCoaching.com. You can follow him on Twitter @JonathanLittle.