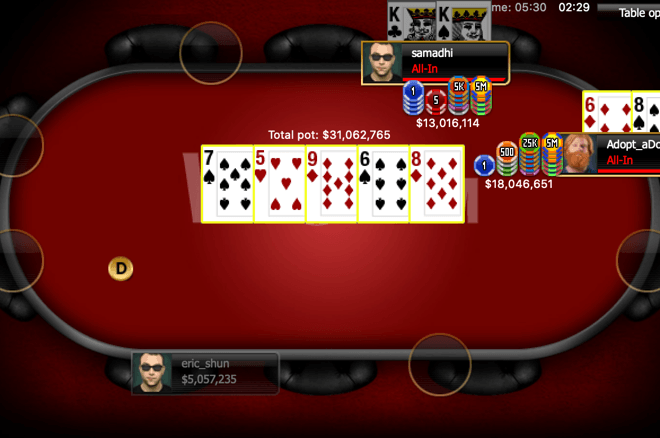 Over the summer, PokerNews reported hundreds of hands in the 2020 World Series of Poker Online bracelet events. Surprisingly, one of the most interesting hands we captured was a chopped pot.

You’ll read the details below, but to set it up know that Leng was in pursuit of his second gold bracelet and flopped the nuts against Binger. Had he won the hand, Leng would’ve more than likely won the tournament, but instead, the chop occurred, and Binger went on to defeat Leng in heads-up play. It was a hand that would haunt a lot of players their entire lives, but not Leng.

We asked him for his thoughts on the hand, and he was kind enough to offer an exclusive street-by-street analysis to PokerNews. Here’s what he had to say.

Beesley folded his button so now it’s on Nick in the small blind. Given Beesley’s short stack, Nick is fairly caged here and should try to avoid playing big pots with me out of position. Obviously busting at this point is an ICM tragedy, but it also really hurts him to let me keep picking off a few BB’s every time the button folds.

So, when Nick 3x’s here I can assume he’s fairly stronger than he would be if there weren’t any implications due to ICM. I have the

in the big blind. I don’t want to three-bet him here and make it really easy for him to just four-bet stuff it on me, especially with unpaired high card hands that I can get him to fold later on in the hand. And just folding preflop is too tight, even though he should have a fairly strong range here, I get to put a ton of pressure on him post flop that it makes this a pure call.

We flop the absolute dream, the

and he leads half pot, 1 million into 2 million. I expect him to shut down with his unpaired high cards at a decent frequency here, so when he bets I think he’s going to wind up being heavily weighted towards value. He has overpairs, the best 9x’s, and all the sets, so I want to start raising now and give him a chance to just get it in right here.

I went with my smaller raise size in game, going 2.6x, but I’m unsure about it in hindsight. If I’m going to stick with my read that he’s very unbalanced and weighted towards value here then maybe I should go bigger, something like 3.5x with the intention of setting up a pot-sized turn shove. As played, he called the 2.6x raise which leaves him with 1.25x the size of the pot heading to the turn.

Check out this in-depth PokerNews feature on Ryan Leng

The turn was the

bringing the second spade and making any eight a one-liner straight now. He checks and now I’m just thinking about sizing. The only overpair that he can have which I benefit from equity denial is pocket tens, so this makes me want to go very small, but then I also want to charge his sets. My

blocks a chunk of his flush draws, though he can certainly still have something like

So, I wound up choosing an interesting size here of about 45% pot. It gives his sets and flush draws a losing price to call, and I also think it’s small enough for him to continue with his overpairs if he wants to be stubborn. This will also set up a river where he’s left with just a couple of BBs more than the short stack, so if he decided call turn with his overpairs he may decide to just call it off on the river thinking he no longer has a stack size advantage over the short stack if he folds river.

The river is a nightmare, bringing the

completing the straight on the board. Now I immediately start trying to figure out how many

he can have here. He has pocket tens in his range, I do not. He could have

maybe, but I do not have those hands. The only

that I have here is

, and that’s at a small frequency, as I will probably peel the flop often with that hand instead of raising 2.6x.

For these reasons, I think Nick made a big mistake by not shoving here. He checks to me and at this point, I think he will always have bet his

given how big the pot is compared to his remaining stack (15 million to 5.8 million) so I guess I have a sort of freeroll to try to make him fold the chop, but I doubt he’s going to at this point. I shove, he calls off and has the

The strategy on this hand is fairly straightforward, but I think the emotional effects of a spot like this can be really interesting. I spent zero time and emotion feeling bad for myself that I had just flopped the nuts in a spot where I’m very often going to bust my opponent and be heads up with a massive lead for a bracelet.

Wasting any time/emotion thinking about what could have been or feeling sorry for yourself can be detrimental to your state of mind, and you just can’t have that this late in a big tourney. In these bigger spots, I find it very easy to just move right on and focus on the fact that I’m currently chip leading three-handed for a bracelet.

If you have trouble doing this on your own, or through meditative practices, you can use a little hack that I’ve used in the past. You determine the narrative inside your head. Instead of, “Ugh, I just got so unlucky to chop that hand,” try telling yourself something like, “I’m going to lose chips in this spot 83% of the time, but I didn’t here, so I got lucky!”

You’re telling yourself a little story and choosing how you want to look at things moving forward. However you do it, it’s imperative that you figure out how to quickly and efficiently shut out negative emotions, that way you’re prepared to stay emotionally controlled when your biggest moments come along.